‘Chulec’ is the name of a traditional French-Canadian farmhouse in Notre-Dame-du-Portage on the south shore of the Lower St-Lawrence. Our maternal grandfather, a mining engineer who built his career on a rock formation known as Chulec high in the Peruvian Andes, bought the house on the eve of the Great Depression in the summer of 1929.

By then the house was already more than 50 years old. The oldest deed on record describes the purchase of land, paid in louis d’or, in 1872 by one Israel Dévot who in turn sold the property in 1875 for a sum in ‘piastres’, this time with the mention of a house.

‘Chulec’ remained a time capsule of the summer of 1929 down to the hand-operated water pump and original Belanger wood stove up until our grandfather’s death in 1978.

The following decade witnessed a transformation of the interior with a flurry of wall-paneling and knotty-pine innovations, alongside sensible measures to preserve the exterior of the house; they may well have been its salvation.

By the summer of 2010 when I was mandated to prepare the house for its eventual sale, it had suffered decades of neglect. When we took stock of the situation we had to admit anyone who bought the property would tear down the house and build new.

Anyone but me. I decided to restore the house, not to turn it into a museum piece but to repair and enhance it so someone else might value it at some future date, forestalling its ultimate destruction. I chose a ‘twenties summer home’ theme as the cue for our renovations and took a solemn oath to preserve wherever I could and to make my own innovations as unobtrusive as possible.

There were a few hard and fast rules, such as ‘nothing Ikea’. It was the first rule we broke – check out the new lower cabinets in the kitchen. The Ikea kitchen faucet cost $19. We bought two.

The principal attraction of the house is the nature all around it, the big sky, broad river and verdant surroundings, but inside it felt barricaded against it. The living room was a dark and forbidding space with heavy curtains and dark wall paneling that absorbed what light did enter.

Our general objective was to bring the outside in by making the first floor bright and uncluttered. The curtains were the first thing to go. The living room wall paneling was turned inside out and secured with pine strips and mouldings to mask bad joints; the paneling received several coats of latex matching the decades-old finish of the door frames and corner cabinet followed by a light general sponging with primer to oxidize the finish and create an illusion of depth.

Living and dining rooms were stripped of their contents – the stove in the living room became an outdoor barbecue – and the oak floors were sanded and given a silver-gray stain to appear oxidized, followed by three coats of water-based varnish. When varnishing a floor, the third coat is key to a beautiful finish; a water-based varnish is not the most durable finish but it has held up well.

The reflectivity of the walls and ceiling brought all the period charm of the room into dramatic relief. Wherever possible and regardless of how damaged we preserved the patina of mouldings, doors and cabinets and painted only where absolutely necessary, matching the new finish with the old.

We also tried to preserve any original structures as much as possible. The original front balcony railings are only 24 inches in height (code is 36 inches) but the balcony is low to the ground and when an insurance inspector expressed concern I vowed I would raise the ground before I replaced the 140 year old railings.

We were obliged to replace both the front steps and the rear balcony stairs and the original second floor railings around the stairwell which were low and horizontal and an invitation to little climbers. 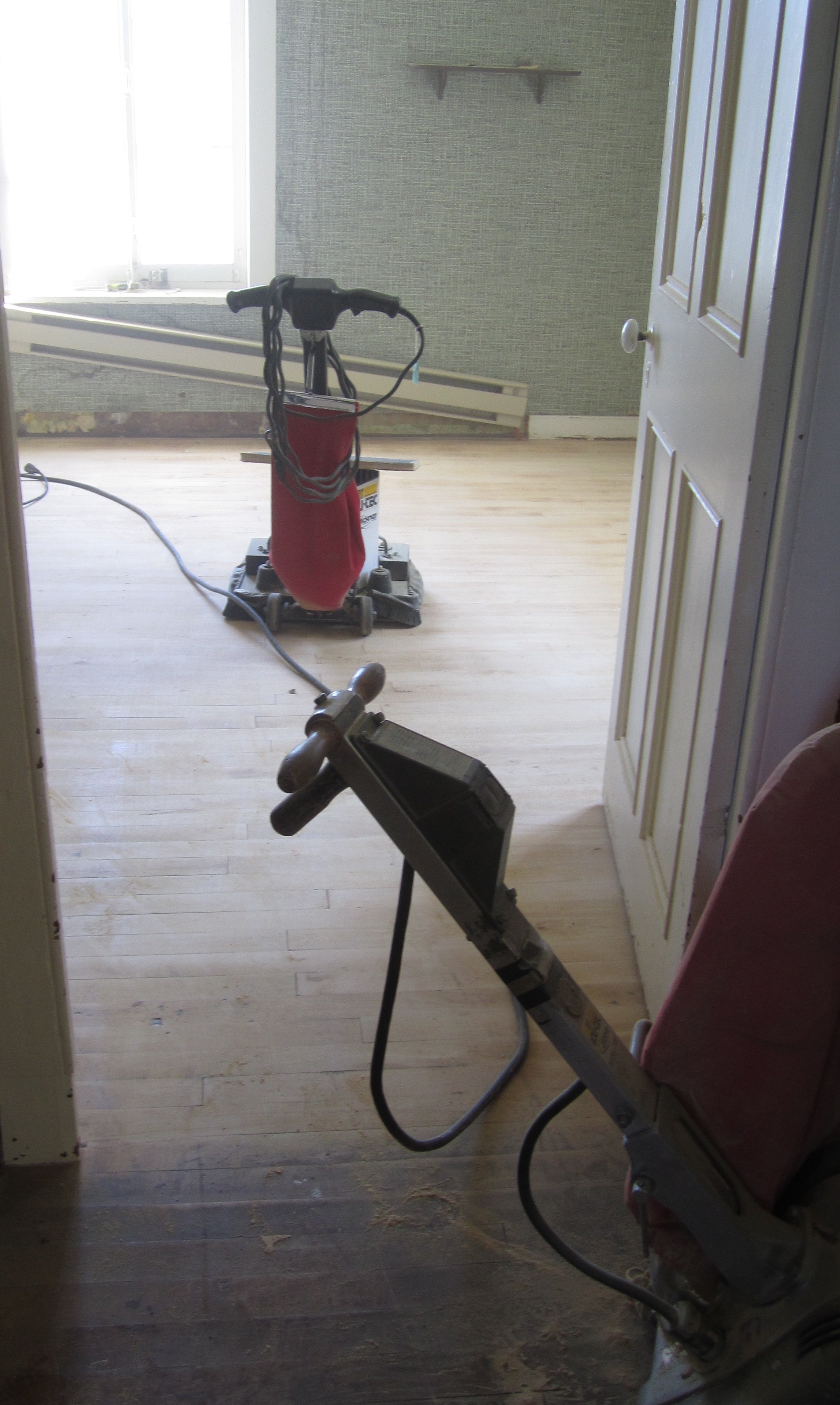 Our priority was rescuing the house from further deterioration by the elements: the roof required emergency repair; the rear balcony was sinking into the ground, its door rotting off its hinges; the stairs were saggy and moss-covered; exterior windows had been draining into 140-year old wooden sills since 1985.

A resident racoon was encouraged to relocate and the rear balcony was jacked up horizontal and stripped of its paint and mouldings. Rotten elements were excised and replaced. The back door was rebuilt with copious mastic (it’s not easy to find a door measuring 33 by 72 inches nowadays). New back stairs were an expedient solution which in no way resemble those of the 1920’s but it’s a summer cottage after all.

Work on the house the following summer was meant to focus on less essential renovations. It was not to be. Like many traditional French-Canadian farmhouses, ‘Chulec’ is just steps away from the river road, a two-lane strip of asphalt that was the Trans-Canada highway of my childhood. That summer the municipality installed a water main under route du Fleuve and our fence, all 300 feet of it, was a casualty.

In the kitchen my initial idea of a quick coat of paint was undone by site conditions, humidity specifically. The house is remarkably square for a house its age and installation of the Ikea lower cabinet frames was a breeze. Finishing the Ikea doors was another matter: we applied two coats of an epoxy reinforced floor paint and set the doors out in the rear balcony to dry. When I first held a door in my hand I realized to my horror the paint had only skinned, despite having baked in the sun for weeks.

Lest you think my summers are spent basking in old-house renovation, they aren’t. It is more a case of weekends with a week of intense work here and there; I logged over 12,000 km commuting between Montreal and Notre Dame du Portage the first summer!

The floor was another painting challenge: weeks after it had been stripped and given two coats of a product by the same unnamed manufacturer of the cabinet door paint, my bare feet still left an impression in the surface. Even in mid- to late-summer there was still too much moisture in the floor; there being no vapour barrier between the finish floor and the subfloor, it was the humid basement and not the ambient air that was dictating terms. The only solution was to strip the floor of its new paint and give it a coat of a Sico urethane-reinforced latex for floors (moisture actually accelerates the curing of the urethane).

We chose laminated oak counter by Ikea for the counter which we protected with linseed oil. We installed the counter at a lower-than-standard height for a period look. My reservations about the counter withstanding the splash around the sink were justified as there was some separation of the laminations at the end of the first summer of rental; replacing the very basic Ikea sink with one with an integral drain board solved the problem.

The trim in the kitchen was painted to match the cream of the upper cabinet doors whose original finish was left intact; the walls were painted a ‘barn wood’ (we hoped) gray, an improvement over the former dark faux-grain paneling but which nonetheless gives the impression of work in progress. And the kitchen is a work in progress, like the rest of the house, like any house, the lighting is poor, the kitchen table is too low to be a comfortable work surface, complaints on the ‘nice to do’ list which are doomed to be forever eclipsed by the essential task of preserving an old structure against the elements of Nature.