It was a homecoming for Jeanne. She had sold her condominium to move into the house she had grown up in and the decision to renovate was an emotional one: the kitchen she would have to demolish was the Tudor fantasy her father had lovingly crafted for her mother when Jeanne was still in her teens.

As precious as it was, the old kitchen was dark and small and lacking in usable counter space. It had also been expressly tailored for Jeanne’s mother who was petite: the counters and cabinets were low; the footprint was small. A false ceiling with Tudor beams made the room cozy in its time, but was claustrophobic by today’s standards. Jeanne and partner Jose both liked to cook and there just wasn’t room for two.

Fortunately there was room for expansion on either interior side. Jeanne’s kitchen was on the first floor of a duplex which had originally been built as a single family home on the eve of the Great Depression. Its conversion to apartments included condemning a narrow stairwell from the first floor kitchen to a small apartment upstairs.

The stairwell was behind a wall to the right of the sink as seen in the photos. Demolition of the wall would reveal the exterior wall of the house on the opposite side of which was a sunporch; creating a passage through the wall would make the sunporch a convenient breakfast nook, and improve the connection between the kitchen and the adjacent dining room.

An earlier proposal saw the expansion of the kitchen in a direction opposite the sink by cannibalizing an underutilized pantry. The sunporch breakfast nook made this unnecessary and the pantry space became part of an expanded master bath we would do in a subsequent leg of Jeanne and Jose’s marathon renovation.

Although economical considering its scale, the renovation was invasive: only the floor was spared. We gutted the space down to the brick, aided in part by the ‘structural brick’ construction of the house – there was only strapping between the plaster and the exterior walls of the house. What that meant, as we presumed, was that the wall hiding the stairs, the wall we were to remove, was load-bearing. 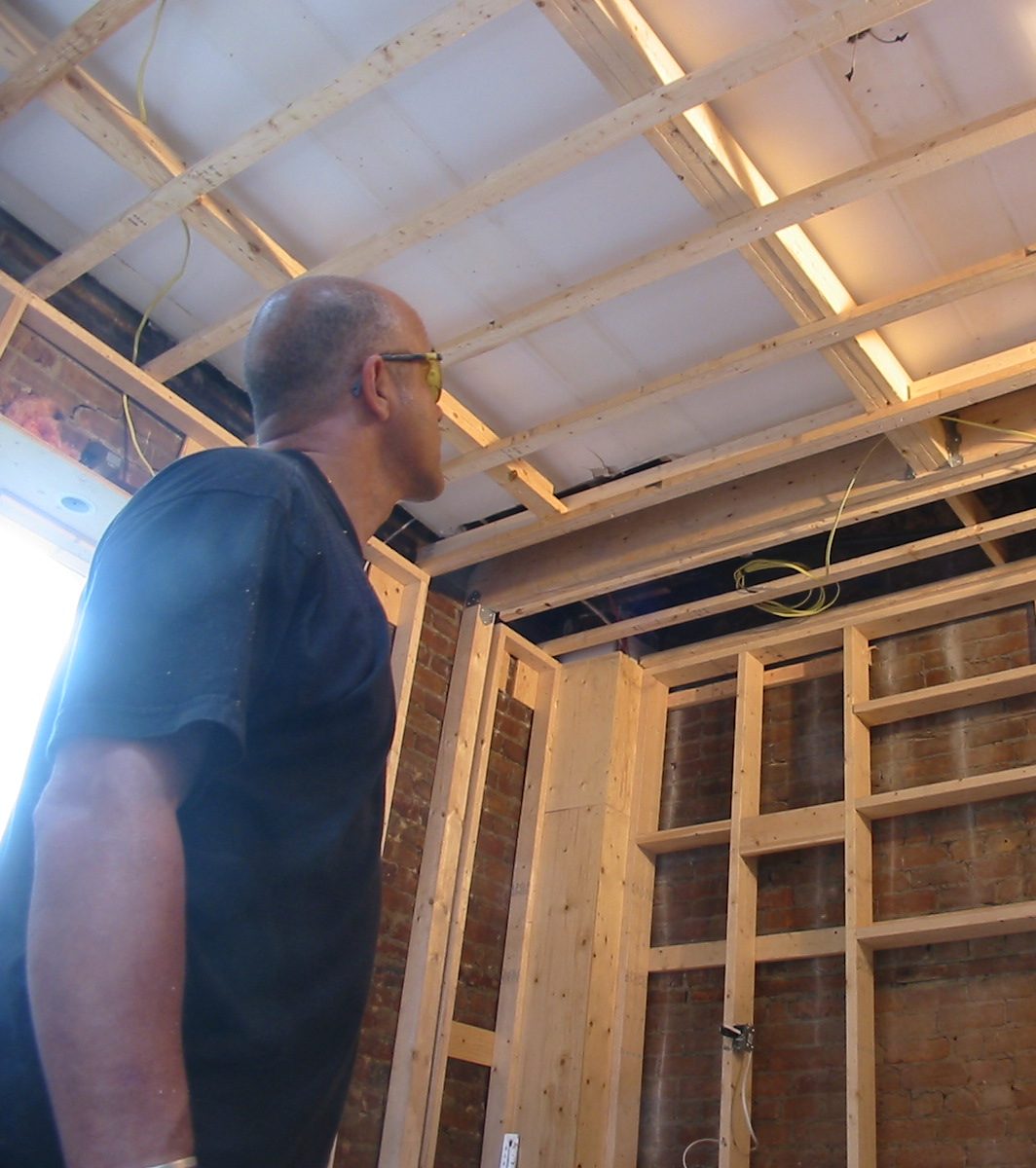 Our first task was to demolish the wall of the stairwell and replace it with a compound beam with posts at either end; we then framed and insulated the exterior walls. The new kitchen configuration occasioned substitution of smaller exterior windows and associated masonry repairs.

Whereas the dropped ceiling of the original kitchen made it claustrophobic, the new ceiling height (approximately eleven feet) inspired feelings of vertigo.

It was also too far away from counter surfaces for pot lights to provide effective task illumination.

Fortunately, we had kept the pine of the original Tudor ceiling and with that we constructed a mobile for our pot lighting suspended 18-24 inches from the new ceiling. It made the tall space less threatening; it also paid tribute to what had been before. 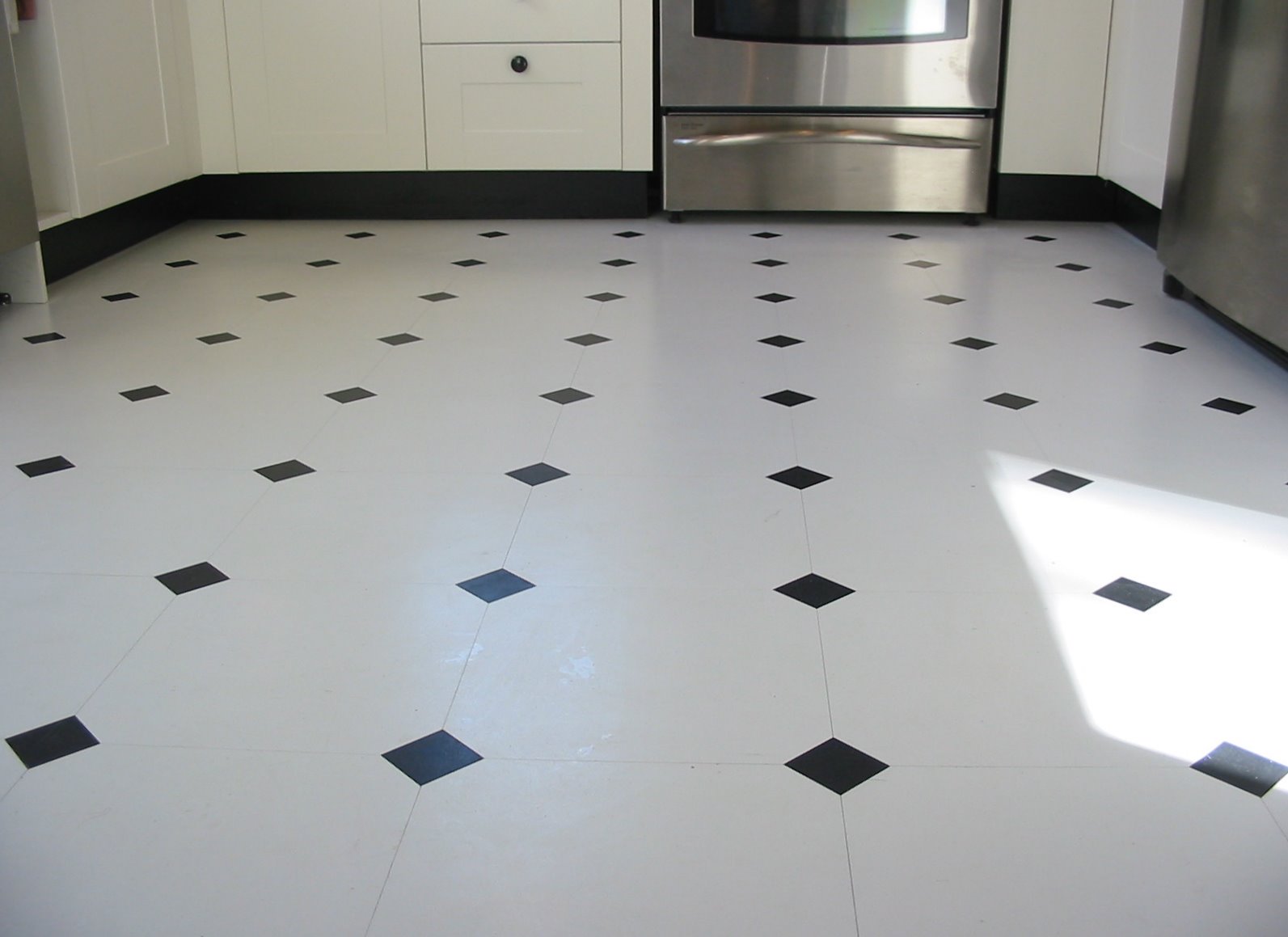 The kitchen was thoroughly contemporary in terms of technology and materials with the addition of flourishes to signal it was in a house built in the first half of the twentieth century. The counter was Arborite and the kitchen was Ikea but the doors were not out of place in a house of its period. We fabricated ‘Craftsman’-style cabinet mouldings for a vintage look.

The linoleum tile floor – we truncated the white tiles to insert little black ‘diamonds’ – was also consistent with the period. Easy to maintain and pleasant underfoot, the choice of a compliant floor covering avoided the additional expense of either replacement or reinforcement of the existing floor structure.